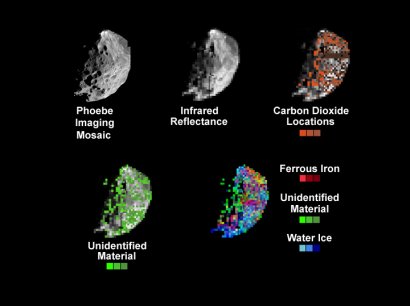 This set of images was created during the Phoebe flyby on 11 June 2004. The images show the location and distribution of water-ice, ferric iron, carbon dioxide and an unidentified material on the tiny moon of Saturn. The first image was taken with Cassini's narrow angle camera and is shown for comparison purposes only. The other images were taken by the visual and infrared mapping spectrometer onboard Cassini.
View »
6-Feb-2023 23:27 UT