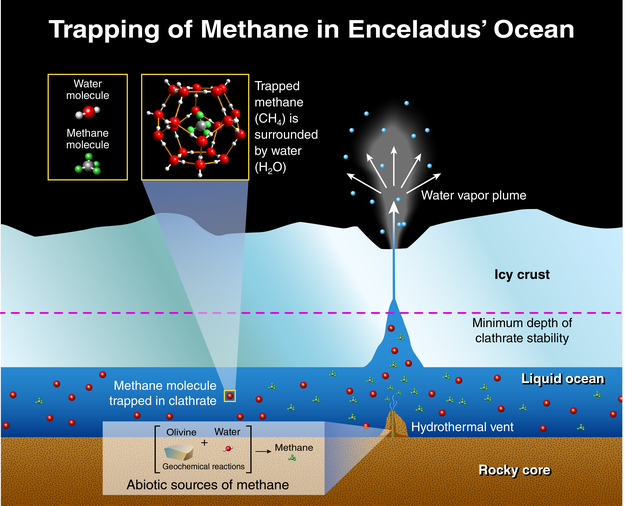 This illustration depicts potential origins of methane found in the plume of gas and ice particles that sprays from Saturn's moon, Enceladus, based on research by scientists working with the Ion and Neutral Mass Spectrometer on NASA/ESA/ASI Cassini mission.

Scientists believe the plumes originate from an internal liquid-water ocean beneath the moon's south polar region. Recent findings from Cassini suggest hydrothermal activity as one of two likely sources of methane in the plume of gas and ice particles that erupts from the south polar region of Enceladus. The finding is the result of extensive modelling to address why methane, as previously sampled by Cassini, is curiously abundant in the plume.

Researchers with Cassini's Ion and Neutral Mass Spectrometer (INMS) determined that, at the high pressures expected in the moon's ocean, icy materials called clathrates could form that imprison methane molecules within a crystal structure of water ice. Their models indicated that this process could be so efficient at depleting methane from Enceladus' ocean that they still needed an explanation for the methane abundance in the plume.

In one scenario, hydrothermal processes supersaturate the ocean with methane. This could occur if methane is produced faster than it is converted into clathrates. A second possibility is that methane clathrates from the ocean are dragged along into the erupting plumes and release their methane as they rise, like bubbles forming in a popped bottle of champagne.

The authors agree that both scenarios are likely occurring to some degree, but they note that the presence of nanosilica grains, as documented by Cassini's Cosmic Dust Analyzer (CDA) instrument, favours the hydrothermal scenario.