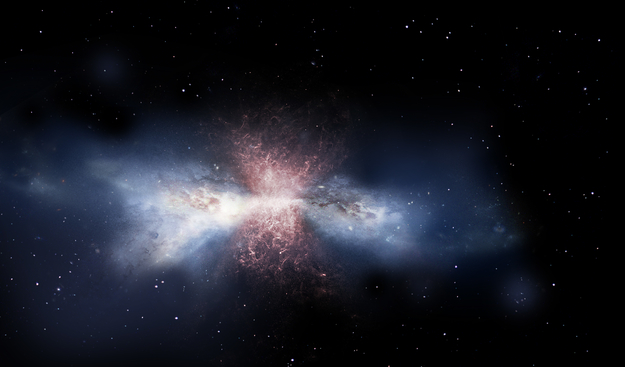 This image shows an artistic representation of the galaxy IRAS F11119+3257, an Ultra-Luminous InfraRed Galaxy (ULIRG) at redshift 0.189, whose light has taken some two billion years to reach us. Astronomers consider these 'local' ULIRGs to be systems that are undergoing massive galactic mergers; in turn, the merger spurs intense bursts of star formation.

This galaxy is also undergoing a massive outflow of molecular gas, which was detected with ESA's Herschel space observatory. Further observations performed in X-rays with the Japanese/US Suzaku X-ray observatory revealed that this outflow is triggered by a wind that is, in turn, driven by the supermassive black hole at the centre of the galaxy.

The combination of these observations yielded the first direct evidence that black-hole driven winds can trigger the outflow of large amounts of molecular gas in the interstellar material of their host galaxy, eventually sweeping away most of the galaxy's reservoir of 'star-making' gas and possibly bringing an end to star formation on a galactic scale.