As part of the on-going Hubble servicing mission a new instrument, the Advanced Camera for Surveys (ACS) was installed on the ESA/NASA Hubble Space Telescope on the morning of 7 March 2002 (European time). We talked to Piero Benvenuti, ESA's project scientist for Hubble, and asked him to share some of his thoughts on this occasion.

Q: What are the benefits for Europe by being part of the Hubble project?

Piero Benvenuti: The main advantage has been that European astronomers have had guaranteed access to the world's most powerful astronomical observatory in space - between 15 and 20% throughout the 12 years since Hubble was launched. But also, importantly they have established or reinforced, very fruitful collaborations with their American colleagues, both in scientific and in technological matters. This long running collaboration has created a mutual 'trust', which will be an essential component for success in the next ambitious project, Hubble's successor, the Next Generation Space Telescope.

Q: How did it feel to see the Faint Object Camera (FOC) removed from Hubble? After all this was developed and built in Europe.

Piero Benvenuti: The ESA-built Faint Object Camera (FOC) is the last of the original Hubble instruments to be removed. It holds the world record for the longest time any piece of space hardware has spent in space before being retrieved and returned to the ground. I am very proud of the fact that it has functioned perfectly since the beginning. It has made some important contributions to our understanding of the Universe.

Normally I don't get very excited by the actual exchange of 'hardware' such as this. My thoughts were not so much on the actual removal [of the Faint Object Camera] from Hubble's instrument bay, which naturally marks the end of FOC's life as an active instrument. I was more thinking that this represents the beginning of something new. FOC is chivalrously giving space to a newer and much better instrument [the Advanced Camera for Surveys, ACS]. And also when FOC is on the ground, it will be carefully analyzed in the laboratory. It will provide very useful information on the behaviour of optics and electronics after being exposed to the harsh environment in space for 12 years. This information will be another invaluable contribution that this successful ESA instrument has given to astronomy.

Q: What is the scientific importance of this Servicing Mission?

Piero Benvenuti: The main feature of this servicing mission, from the pure scientific point of view, is the installation of the Advanced Camera for Surveys. It is a digital camera served by a modern light-sensitive detector, much more efficient in many ways from the ones previously installed. Let's not forget that in the last two decades we have seen a tremendous technological progress in the field of digital imaging. Tomorrow [8 March 2002] the second big scientific event of this mission will happen. The capabilities of Hubble's infrared instrument, NICMOS [Near Infrared Camera and Multi-Object Spectrometer], will be partially restored. A 'refrigerator' will be installed that will cool the instrument down to operational temperatures [to observe in the infrared a cold instrument is needed - in this case -195 C].

Also the more 'technological' side of the Servicing Mission is naturally essential to the science - without a well-functioning observatory, the science will not be world-class: Hubble's new solar panels and the reboost of Hubble to a higher orbit will ensure a much longer operational life of our unique space observatory.

Q: How much better will the upgraded Hubble be?

Piero Benvenuti: Hubble's new 'eye' will improve Hubble's vision, both because it can see more [it has a larger field of view] and it is more sensitive. It is always difficult to quantify such an improvement in a simple and accurate manner. In one sentence, we can say that Hubble will 'see' approximately ten times better than previously, or if you wish, make the same observations ten times faster than before. For instance we can make a new Hubble Deep Field in a few days instead of 20 days.

Q: Can you give us some examples of the types of science you think we'll see with the 'new' Hubble?

Piero Benvenuti: Although all branches of astrophysics will benefit from the improved imaging capabilities and from the resuscitated infrared instrument, I believe that the main interest will be in the distant [in space and time] Universe. The wider and deeper images of the Advanced Camera for Surveys are indeed ideal to explore the infant Universe and detect the possible signs of the first building blocks of today's galaxies. ACS will also deliver fantastic images of objects in our own Milky Way, like nebulae and planetary nebulae, that will be both scientifically interesting to explore for the astronomers as well as beautiful to look at for the general public.

Q: When are we going to see the first results from the new instruments?

Piero Benvenuti: After Hubble is released from the Shuttle bay, we will have to wait about 4 to 6 weeks before the first images and spectra are publicly released. The reason it takes so long is that there first is a period during which the hardware and software will be tested. Then there is 'science verification' - this is when the scientists will check that the new images and spectra are scientifically correct. After 4-6 weeks the first results, formally called 'SM3B Early Release Observations', will be released to the public. I really look forward to see what the new-look Hubble has in store for us. 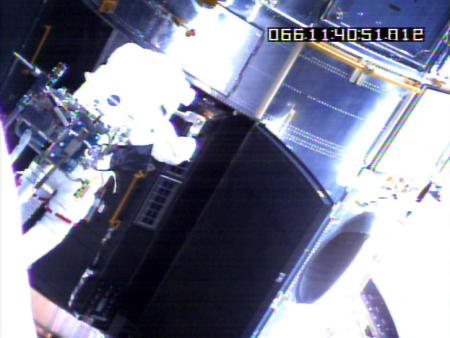 Q: Is Hubble in your opinion slowing losing ground in the 'competition' between space- and ground-based telescopes?

Piero Benvenuti: No, contrary to what many other people say and write, I really don't think so. Although ground-based astronomy is making astonishing progress both in terms of light collecting area (the size of the mirrors), which is now in the 8-10 metre range ramping up to 30-100 metre in the near future, and in ingenuity of its instrumentation, Hubble's unique advantage in being above the terrestrial atmosphere will never be surpassed. Rather, the synergy and the complementarity between ground- and space-based astronomy will be more and more important in the future, Hubble giving the 'sharpness' of vision and the large telescopes on the ground adding their great light sensitivity.

Piero Benvenuti, ESA's Hubble Project Scientist is based at the Space Telescope European Coordinating Facility in Munich, Germany. He has been involved with Hubble since 1984. Prior to that he was Observatory Director for the International Ultraviolet Observatory at the European Space Agency's Vilspa ground station, near Madrid, Spain.