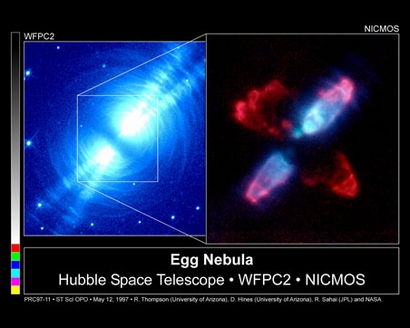 The Egg Nebula, also known as CRL 2688, is shown on the left as it appears in visible light with the Hubble Space Telescope's Wide Field and Planetary Camera 2 (WFPC2) and on the right as it appears in infrared light with Hubble's Near Infrared Camera and Multi-Object Spectrometer (NICMOS). Since infrared light is invisible to humans, the NICMOS image has been assigned colors to distinguish different wavelengths: blue corresponds to starlight reflected by dust particles, and red corresponds to heat radiation emitted by hot molecular hydrogen.
View »
9-Dec-2022 20:39 UT