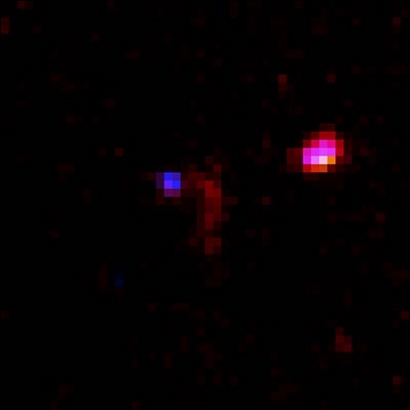 Depicts: A "most distant in Universe" candidate
Copyright: Rodger I. Thompson (University of Arizona), and NASA
Show in archive: true

Two close-up NICMOS views of candidate objects which may be over 12 billion light-years away. Each candidate is centered in the frame. The reddish color may mean all of the starlight has been stretched to infrared wavelengths by the universe's expansion. Alternative explanations are that the objects are closer to us, but the light has been reddened by dust scattering. A new generation of telescopes will be needed to make follow-up observations capable of establishing true distance.
View »
2-Dec-2022 13:13 UT