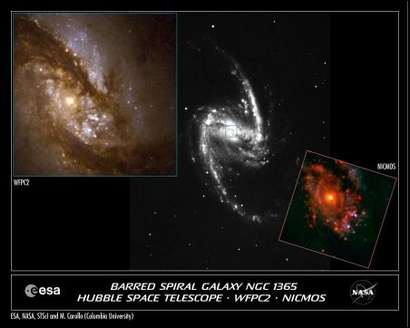 This collage of images in visible and infrared light reveals how the barred spiral galaxy NGC 1365 is feeding material into its central region, igniting massive star birth and probably causing its bulge of stars to grow. The material also is fueling a black hole in the galaxy's core. A galaxy's bulge is a central, football-shaped structure composed of stars, gas, and dust.
View »
28-Nov-2022 04:26 UT