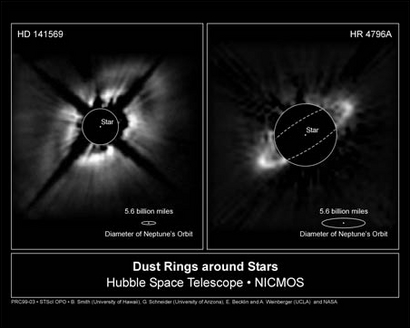 A striking NASA/ESA Hubble Space Telescope near-infrared picture of a disk around the star HD 141569, located about 320 light-years away in the constellation Libra. Hubble shows that the 75 billion-mile wide disk seems to come in two parts: a dark band separates a bright inner region from a fainter outer region. The structure superficially looks much like the largest gap in Saturn's rings - but on a vastly larger scale.

A NASA/ESA Hubble Space Telescope false-color near infrared image of a novel type of structure seen in space - a dust ring around a star. Superficially resembling Saturn's rings -- but on a vastly larger scale -- the "hula-hoop" around the star called HR 4796A offers new clues into the possible presence of young planets.