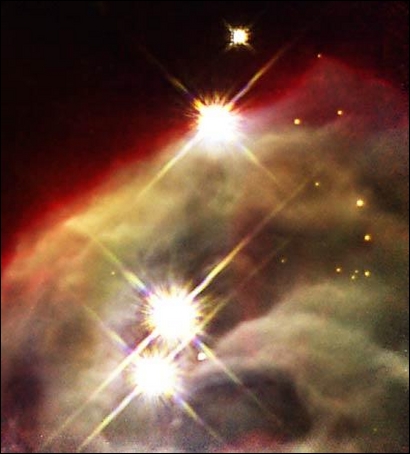 The revived Near Infrared Camera and Multi-Object Spectrometer (NICMOS) aboard the NASA/ESA Hubble Space Telescope has penetrated dust layers in a star-forming cloud to uncover a dense, craggy edifice of dust and gas.

This NICMOS image shows the Cone Nebula (NGC 2264), so named because, in ground-based images, it has a conical shape. NICMOS enables the Hubble telescope to see near-infrared wavelengths of light, so that it can penetrate the dust that obscures the nebula's inner regions. However, the Cone is so dense even the near-infrared 'eyes' of NICMOS cannot penetrate all the way through it.

The NICMOS colour composite image was made by combining photographs taken through J-band, H-band, and Paschen-alpha filters. The NICMOS images were taken on 11 May 2002.