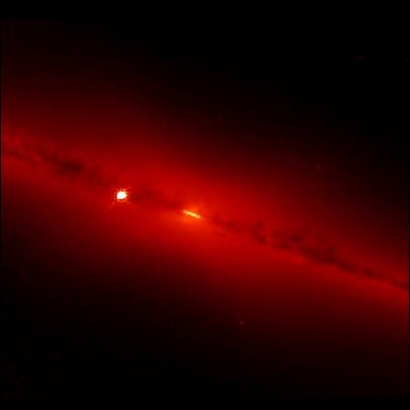 The revived Near Infrared Camera and Multi-Object Spectrometer (NICMOS) aboard the NASA/ESA Hubble telescope has penetrated the dusty disc of the 'edge-on' galaxy NGC 4013 and looked right into the galactic core. To the surprise of astronomers, NICMOS found a brilliant band-like structure, that may be a ring of newly formed stars seen edge-on.

This picture, taken with a filter sensitive to hydrogen, shows the glow of stars and gas. Astronomers used this information to calculate the rate of star formation in the ring-like structure.

This image, obtained on 12 May 2002, was taken through the Paschen-alpha filter.