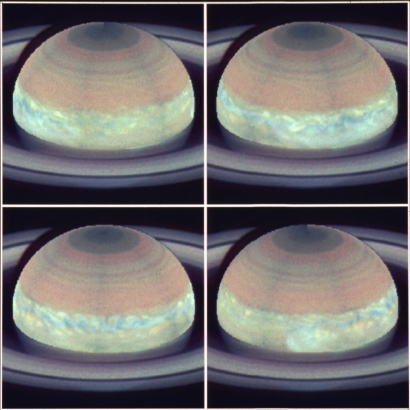 The image shows the Saturn white spot, a great storm in the equatorial region of Saturn, discovered by amateur astronomers in September 1990. Such storms are rare: the last one in the equatorial region occurred in 1933. The montage of images cover a complete rotation of Saturn. The storm extends completely around the planet, in some places it appears as great masses of clouds and in others as well organized turbulence. Knowing that this storm is probably a once in a lifetime event, scientists and engineers of a special White Spot Observing Team, the Wide Field/Planetary Camera Team, the Space Telescope Science Institute, and the Goddard Space Flight center reprogrammed the observing schedule of the Hubble Space Telescope. They were able to get several days of Saturn observations in mid-November, shortly before Saturn moved too near in the sky to the Sun for safe observations by HST.
View »
5-Feb-2023 10:09 UT