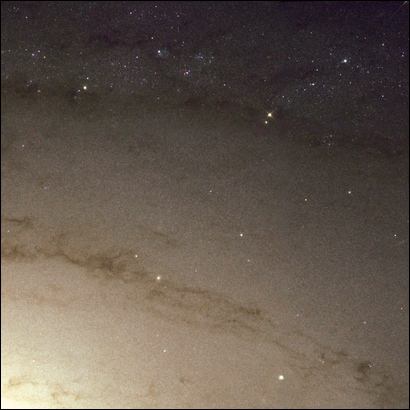 This NASA/ESA Hubble Space Telescope image shows a small portion of one of Messier 81's spiral arms. It extends about 0.03 x 0.03 degrees. The supernova companion is the bluish star in the upper right hand corner. Dust lanes in the spiral arms of the galaxy are seen, as well as many other stars and a few star forming nebulae. The image is composed of four separate exposures from the ESO/ST-ECF Archive through a blue filter, a green filter, a red filter and a near-infrared filter. The image was taken with Hubble's Wide Field and Planetary Camera 2. Acknowledgement: Bob Kirshner (Harvard University, USA)
View »
28-Nov-2022 21:45 UT