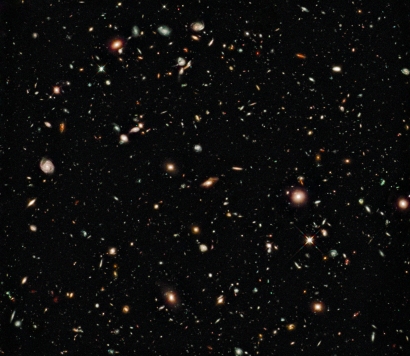 In 2004, Hubble created the deepest visible-light image of the Universe and now, with its brand-new camera, Hubble is seeing even farther in the same region. Hubble's newly installed Wide Field Camera 3 (WFC3) collects light from near-infrared wavelengths and therefore looks even deeper, because the light from hot young stars in very distant galaxies is stretched out of the ultraviolet and visible regions of the spectrum into near-infrared wavelengths by the expansion of the Universe. The new deep view also provides insights into how galaxies grew in their formative years early in the Universe's history.

This image is a composite of separate exposures made by the WFC3 instrument on the Hubble Space Telescope. Three filters were used to sample broad wavelength ranges in the near-infrared. The colour results from assigning different colours to each monochromatic image. In this case, the assigned colours are: F105W (Y) blue, F125W (J) green and F160 (H) red.

The image is roughly 2.4 arcminutes wide.