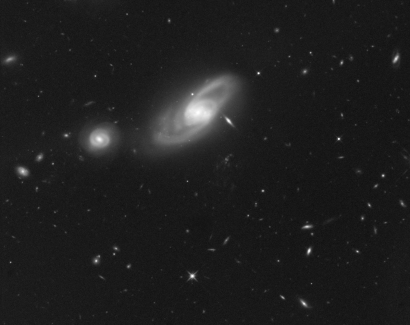 A vast number of galaxies are seen in this Hubble infrared image of the area surrounding the space oddity, Hanny's Voorwerp. Located in the constellation Leo Minor, a faint outline of the mysterious object, which is primarily visible in the light emitted by glowing oxygen, can be seen below the large galaxy IC 2497 near the centre.

Leo Minor is known for its galaxy clusters, and this image is a testament to that fact. Most galaxies in this picture are spirals, shown nearly face-on, as is the case with IC 2497 and its smaller companion to the left, or edge-on, as demonstrated by the multitude of elongated objects in the background.

This Hubble image was taken on 4 April 2010, with the Wide Field Camera 3's infrared detector. This near-infrared view of galaxies is typical of what is to come with the James Webb Space Telescope, whose prime purpose will be to image the Universe in infrared wavelengths with high resolution.

Hubble Zooms in on a Space Oddity [heic1102]