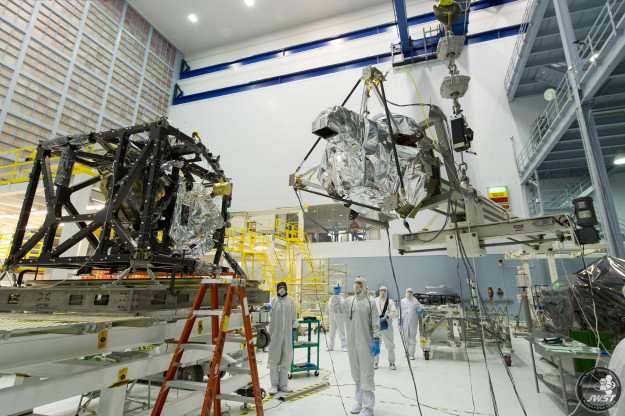 MIRI, suspended from the overhead crane, is wrapped in an aluminized thermal shield to keep it cold and stop the instrument from picking up false readings when in space due to thermal emissions from the other instruments or from the spacecraft. The periscope-like part is the pickoff mirror which is needed to re-direct the light from the telescope focus onto the MIRI focal plane.

MIRI is attached to the Horizontal Integration Tool (HIT). This special balance beam, which was also used for the Hubble Space Telescope, is manoeuvred using a precision overhead crane by the engineer with the black shoulder strap.

The black composite structure on the left is the ISIM, the framework that will hold all four of the JWST instruments. The lower part of MIRI's thermal shield is already installed on the ISIM. MIRI's pickoff mirror will fit through the black rectangle in the centre of the lower shield.