ESA Science & Technology - Venusian Clouds and Winds in the Infrared 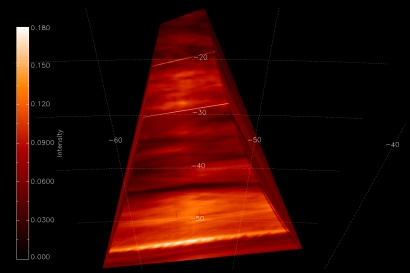 This infrared image was taken by the Ultraviolet/Visible/Near-Infrared spectrometer (VIRTIS) on 25 April 2006, while Venus Express was flying over low planetary latitudes (between 15° and 60° south).

The image, taken at 1.7 μm, shows a fine atmospheric structure below the Venusian cloud deck at about 20 kilometres altitude.

The image is composed of multiple images projected onto geographical coordinates. The images at the top where taken from a distance of about 6000 kilometres from the surface, allowing VIRTIS to observe the higher resolution details. While Venus Express continued flying over the planet it got farer from the surface - up to 20 000 kilometres distance - allowing VIRTIS to obtain a wider view, but in lower resolution.  At the bottom of this image, stripe-like features are visible that could be indicative of a wave-like atmospheric motion (possibly due to tidal forces), but their nature is still unexplained.