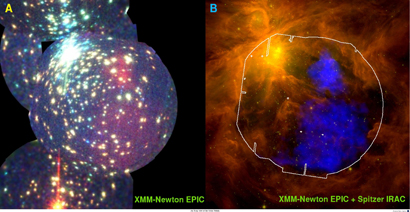 The Orion Nebula is one of the most studied regions of star-formation. It is a nearby (about 1500 light years away), large (the central bright region covers about 1 square degree) stellar nursery that is home to thousands of stars in various stages of formation. The energetic stars of the nebula have blown away much of the obscuring gas and dust clouds providing a clear view in a region of active star formation and evolution. Observations of this nebula have provided important new insight into the formation of stars and planets. While gas in star-forming regions is usually relatively cool, XMM-Newton discovered that the Orion Nebula also contains a huge cloud of extremely hot gas, or plasma, heated to millions of degrees.

The images above show the Orion Nebula with a huge cloud of high-temperature gas discovered by XMM-Newton. The left panel is an X-ray image obtained with XMM-Newton, with the hot gas seen as a red haze. The right panel, a Spitzer infrared image of the Orion Nebula overlaid with XMM-Newton X-ray data (in blue), shows the newly discovered hot gas cloud. The Orion Nebula is the nearest dense star-forming region to Earth that contains stars much more massive than the Sun. XMM-Newton’s newly-discovered gas cloud is composed of winds blowing from these high-mass stars that are heated to millions of degrees as they slam into the surrounding gas. Prior to this discovery it was generally thought that powerful supernova explosions would be required to produce such a huge, hot plasma cloud. This result suggests that such X-ray outflow phenomenon should be common in star-forming regions, and therefore widespread throughout our galaxy.