The discovery of asteroids
Within this article:

The discovery of asteroids

During the 18th century, astronomers were fascinated by a mathematical expression called Bode's law. It appeared to predict the locations of the known planets with one exception. Bode's law suggested there should be a planet between Mars and Jupiter. When William Herschel discovered Uranus (the seventh planet) during 1781, at a distance that, again, corresponds to Bode's law, scientific excitement about the validity of the mathematical expression reached an all-time high. Many were absolutely convinced that a planet must exist between Mars and Jupiter.

By the end of the century a group of astronomers had banded together to use the observatory at Lilienthal, Germany, owned by Johann Hieronymous Schröter, to hunt down this missing planet. They called themselves, appropriately, the Celestial Police.

Despite their efforts, they were beaten in the chase by Giuseppe Piazzi, who, on New Year's Day 1801 from the Palermo Observatory, discovered what he believed to be the missing planet. The new discovery was named Ceres but subsequent observations swiftly established that it could not be classed a major planet as its diameter is just 940 km (Pluto, the smallest planet, has a diameter is just over 2300 km). Instead, it was classified as a minor planet and the search for the 'real' planet continued.

Between 1801 and 1808, astronomers tracked down a further three minor planets within this region of space: Pallas, Juno and Vesta, each smaller than Ceres. It became obvious that there was no single large planet out there and enthusiasm for the search waned.

The fifth asteroid, Astraea, was discovered in 1845 and interest in the asteroids as a new 'class' of celestial object began to build. In fact, since that time new asteroids have been discovered almost every year. It soon became obvious that a 'belt' of asteroids existed between Mars and Jupiter. This collection of space debris was the 'missing planet'. It was almost certainly prevented from forming by the large gravitational field of adjacent Jupiter.

Now there are a number of telescopes dedicated to the task of finding new asteroids. Specifically, these instruments are geared towards finding any asteroids that cross the Earth's orbit and may therefore pose an impact hazard.

With the development of photographic film, and its subsequent application to astronomy during the late 1800s, searching for asteroids became much easier. They would appear on long-exposure photographs as streaks because of their motion, whereas the stars continued to show up as points of light. It soon became obvious that asteroids littered the Solar System and were not all confined to the asteroid belt.

During the 1930s, two astronomers set up in competition to see who could discover the most unusual asteroid. Those in the main belt usually have more or less circular orbits. However, if the orbit becomes smaller and more elliptical, then asteroids can draw close to - or even collide with - the inner planets. Eugene Delporte, in Belgium, made the first strike in March 1932 when he discovered asteroid Amor. This space rock spends over half its orbit outside the main belt and actually crosses Mars' orbit. It comes close to Earth's orbit before heading back outwards again.

The very next month, Karl Reinmuth, in Heidelberg, discovered Apollo. This asteroid spends much less time in the main belt, spending most of its time inside Mars' orbit. In fact, Apollo crosses the Earth's orbit, too.

Since this time, other examples of asteroids that follow similar orbits have been discovered and are now classified into Amor and Apollo families. The fact that many asteroids share similar orbits, leads to the realisation that a systematic process is responsible for 'corralling' them into these positions. The best theories suggest that gravitational nudges by Jupiter can throw main-belt asteroids into these smaller, more elliptical orbits.

In 1971, the most remarkable family of asteroids were discovered. These are the Atens, named after their prototype, which was discovered by Eleanor Helin. They spend more of their time inside the Earth's orbit and are thus hidden from us by the glare of the daytime sky, apart from when they cross Earth's orbit for a brief period, before returning close to the Sun.

There may be other families of small asteroids within our Solar System that, even now, remain to be discovered. 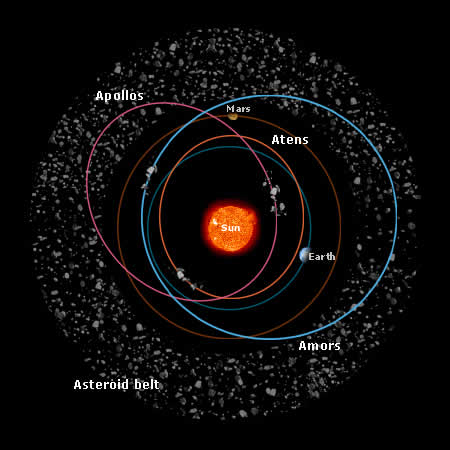 The families of asteroids follow the orbits of their prototypes. Amors cross Mars' orbit but do not cross Earth's. It is the Apollo asteroids that cross Earth's orbit. There are also the Atens. These asteroids spend most of their time inside Earth's orbit, crossing it briefly before disappearing back into the glare of the Sun.

Structure and composition of asteroids

Nearly all asteroids are irregular in shape and heavily pockmarked by impact craters. Only a handful of the largest members possess enough gravity to pull them into spherical shapes.

Beyond their shape, there are a number of ways to classify asteroids. The first is by composition. The typical composition of an asteroid depends on its distance from the Sun. At the outer edges of the asteroid belt, that is between three and three and a half times further from the Sun than the Earth, over eighty percent of the asteroids are known as C-type. The C stands for carbon and the surfaces of these asteroids are almost coal-black. These asteroids contain large quantities of carbon molecules as well as the more usual rocks and metals. They are very similar in composition to the carbonaceous chondrite meteorites that sometimes fall on Earth. It is thought that these meteorites are chippings, smashed off during collisions between asteroids.

Closer to the Sun, at just over twice the Earth's orbital distance, the proportion of C-type asteroids is only about 40 percent. Here, the majority of asteroids are grey, without the carbon material and principally made of silicate compound rock. These too resemble a type of meteorite found on Earth, the chondrites. Although these two types of asteroid form the majority of examples, there are some that appear to be composed of little but metal and, again, there are metal meteorites found on Earth.

Aside from composition, there are other important differences in the internal structure of the asteroids. Most are solid, indicating that they must have been molten at some point in their existence. Others are 'rubble piles'. This means that they are loose collections of 'pieces', held together by the force of their gravity. These asteroids were formed in collisions.

An increasing number of asteroids are being found to be 'doubles'. This means that they are two similarly sized asteroids that have drifted together gently and now orbit around each other, sometimes even touching, as they share a path around the Sun.