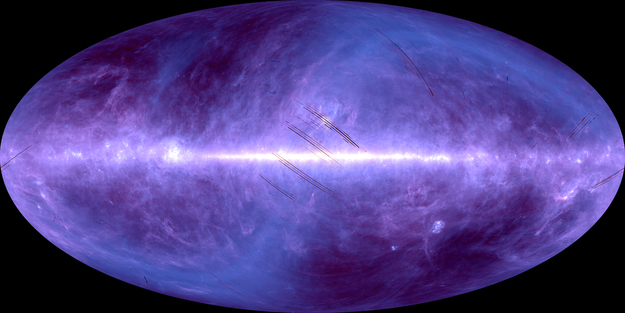 This picture is an all-sky image created from observations obtained with the AKARI space telescope. The colour image is a combination of two far-infrared wavelengths: 90 micrometres (in blue) and 140 micrometres (in red).

The Milky Way is the bright band extending horizontally across the image, and the Large and Small Magellanic Clouds, two of the closest galaxies to our own, can be seen as white smudges in the lower right of the image. The S-shaped band represents light from dust in the Solar System.

Bluer areas indicate warmer interstellar medium, whereas redder areas are colder; in this case, material seen (or emitting) at 140 micrometres is expected to be colder than about -240°C.

The AKARI space telescope observed more than 99% of the entire sky, with 1-1.5 arcminute resolution, to construct a detailed far-infrared all-sky map. The unobserved part, of less than 1%, is seen as black streaks on this image.