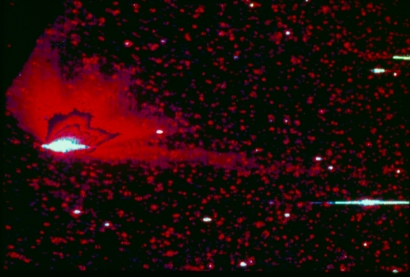 This is slide 5 of 12 from the second Giotto slide set. The following caption is the one originally provided with the slide set. This false colour picture of Halley, taken on 22 February 1986, shows at least seven tails. The false colours make it easier to see the faint details. The image is a composite, made from six frames; total integration time is nine minutes. The white area in Halley and the vertical lines near two bright stars in the upper half of the picture are due to overexposure. On this date, the comet was 209 million kilometres from the Earth and 97 million kilometres from the Sun. Two ion tails point towards the west. The longest is about 6 or 22 million kilometres long. The other tails, which form a wide fan towards the north, are rather red and consist mainly of dust that reflects sunlight. This dust was released from the nucleus some days earlier. The dust tails are like treerings, each corresponding to a particular outburst. By measuring their shape and direction, it was possible to reconstruct the sequence of outbursts which took place near perihelion.
View »
9-Dec-2022 02:26 UT