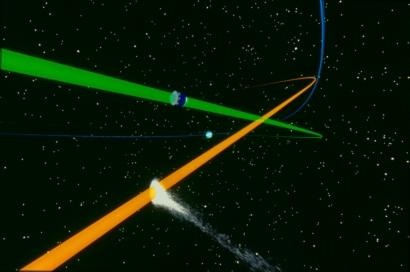 This is slide 7 of 12 from the second Giotto slide set. The following caption is the one originally provided with the slide set. In this computer graphic Giotto and Comet Grigg-Skjellerup are shown approaching each other, as seen from outer space. Earth is in the background. The spacecraft, comet, and Earth are all moving in roughly the same direction. Because of this, the relative velocity between Giotto and the comet Grigg-Skjelierup will be considerably smaller than at the encounter with Halley. Passing through the ecliptic plane from the north, the comet will 'catch-up' with the spacecraft, since its orbital velocity will be 38.23 km/s, compared with Giotto's 30.64 km/s. It is expected that Giotto will pass within 1000 km of the nucleus.
View »
9-Dec-2022 03:30 UT