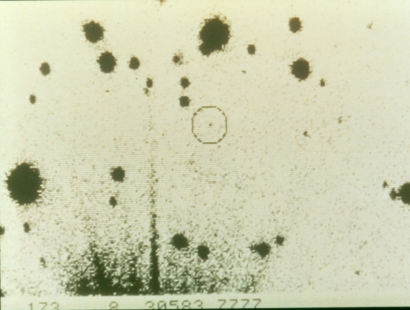 This is slide 4 of 20 from the first Giotto slide set. The following caption is the one originally provided with the slide set. Recovery of P/Halley 1982i on 16 October 1982 by astronomers D. C. Jewitt and G. E. Danielson, using the 5.1 m Mount Palomar telescope and a CCD electronic camera. The comet was identified by its motion of 3.5 arc seconds per hour against the star background, by its position which was within 8 arc seconds from the position predicted for it by D. Yeomans and by its visual magnitude of 24.2 (23.1 predicted). The comet is shown in the centre of the circle. For comparison, the big black spot vertically above it is a star of magnitude 21. At the time of the recovery Halley was 11 AU away from the Sun
View »
4-Jul-2022 15:35 UT