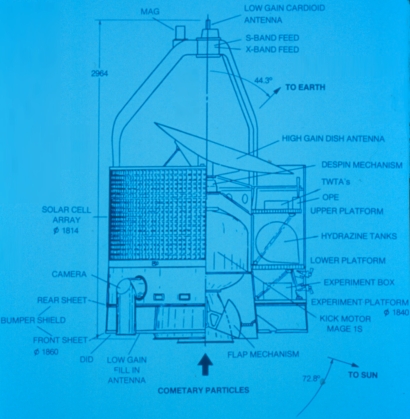 This is slide 6 of 20 from the first Giotto slide set. The following caption is the one originally provided with the slide set. Diagram of Giotto spacecraft. The left half shows the outside of the spacecraft, the right half gives a cross sectional view. The spacecraft is cylindrical in shape. During flight it is spin-stabilised, nominally at 15 rpm. During the encounter the spacecraft spin axis is aligned with the relative velocity vector such that cometary dust and gas particles impact on the spacecraft from below. The directions to the Earth and the Sun are representative for the encounter.
View »
29-Nov-2022 21:48 UT