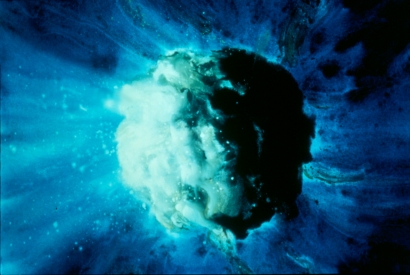 This is slide 5 of 20 from the first Giotto slide set. The following caption is the one originally provided with the slide set. Artist's concept of a cometary nucleus. The nucleus is presumed to be a body of a few kilometres in diameter (not necessarily round) consisting mostly of water ice with dust mixed in. On approaching the Sun the nucleus is heated up and releases enormous amounts of dust and gas (a few tons per second), preferentially from the sunward side.
5-Dec-2020 13:09 UT