Adoration of the Magi

Adoration of the Magi 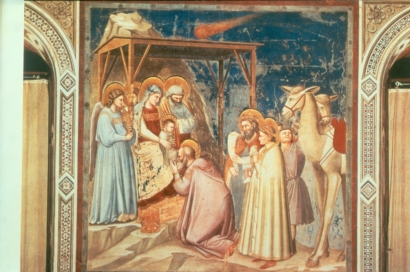 This is slide 1 of 20 from the first Giotto slide set. The following caption is the one originally provided with the slide set. 'Adoration of the Magi', one scene in a fresco cycle, painted by the Florentine master Giotto di Bondone. The cycle decorates the interior of the Scrovegnichapel in Padua and was probably begun in 1303. Halley's Comet appeared in 1301 and served as a model for Giotto's 'Star of Bethlehem'. ESA named its mission to Halley's Comet 'Giotto' in recognition of the fact that Giotto di Bondone made the first 'scientific' drawing of the comet recorded in history.
View »
9-Aug-2022 23:30 UT