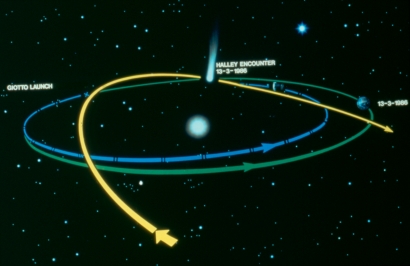 This is slide 16 of 20 from the first Giotto slide set. The following caption is the one originally provided with the slide set. 8 months after launch the Giotto spacecraft (blue curve) encounters Halley's Comet (yellow curve). The encounter occurs around 00 UT on 14 March 1986, about one month after the comet's perihelion passage. At the time of the encounter the Sun is 0.89 AU away, the Earth (green curve) is 0.98 AU away. Halley's orbit is retrograde, that is its orbit sense is opposite to that of the Earth and the spacecraft and, therefore, the flyby velocity is very high.
View »
29-Nov-2022 20:20 UT