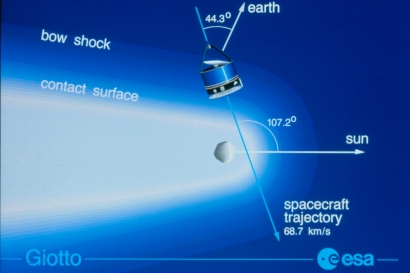 This is slide 17 of 20 from the first Giotto slide set. The following caption is the one originally provided with the slide set. Giotto will be targeted to pass the nucleus a few hundred, nominally 500, kilometres on the sunward side. The spacecraft will enter the visual coma about an hour before the time of closest approach. The sizes shown are not to scale. The nucleus is only a few kilometres in diameter, a contact surface separating the cometary ions from the disturbed solar-wind/comet interaction region is expected at 1000 km, a bow shock at 105-106 km. The bumper shield at the bottom of the spacecraft will protect it from destruction by dust particles impacting at the flyby velocity of 68.7 km/s. It is estimated that the probability for surviving the flyby is >90%.
View »
8-Dec-2022 08:43 UT