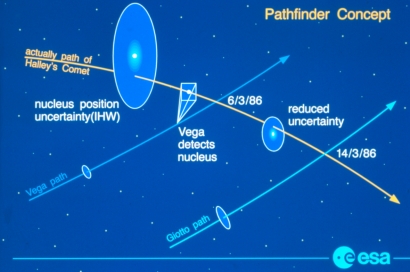 This is slide 19 of 20 from the first Giotto slide set. The following caption is the one originally provided with the slide set. About 2 days before the encounter a final decision will have to be made where to target the Giotto spacecraft. Unfortunately, the position of the comet nucleus can only be estimated because the nucleus is disguised by the coma dust and gas. Based on observations from the Earth the nucleus position is known with an accuracy of 500 km (1Ã). If the spacecraft is targeted at 500 km the actual flyby distance could be anywhere between 0 and 1000 km or more. This is not a very satisfactory situation.
View »
29-Nov-2022 22:25 UT