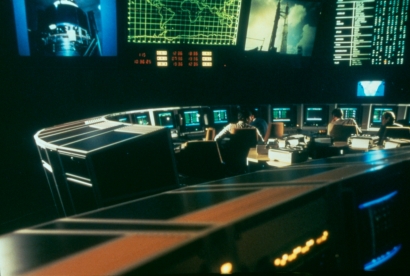 This is slide 20 of 20 from the first Giotto slide set. The following caption is the one originally provided with the slide set. Main Control Room at the European Space Operations Centre (ESOC) in Darmstadt, W. Germany. This room will be used during the encounter to track and operate the spacecraft and monitor its health. During the encounter science data are transmitted from Giotto to the 64 m ground station at Parkes, NSW, Australia at a rate of 40 kbps. The station is owned by the Australian CSIRO Institute. The data are transmitted at full rate in real time via 8land lines to ESOC where they are separated for the various experiments, processed and displayed on VDUs (Visual Display Units) for preliminary analysis.
5-Dec-2020 11:05 UT