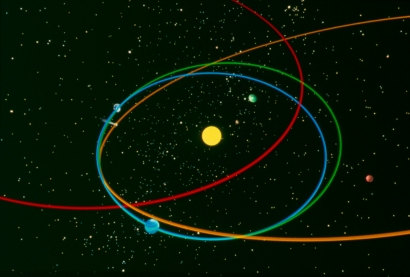 This is slide 6 of 12 from the second Giotto slide set. The following caption is the one originally provided with the slide set. Computer graphics showing the orbits of the Earth (blue), Comet Grigg-Skjellerup (brown), and that of the spacecraft Giotto (green). The orbit of comet Halley through the inner Solar System is also shown (red). Comet Grigg-Skjellerup and Giotto can be seen shortly before closest approach. The High Gain Antenna is pointed towards Earth to allow communication and so that scientific data can be received by the ground stations.
View »
9-Dec-2022 02:31 UT