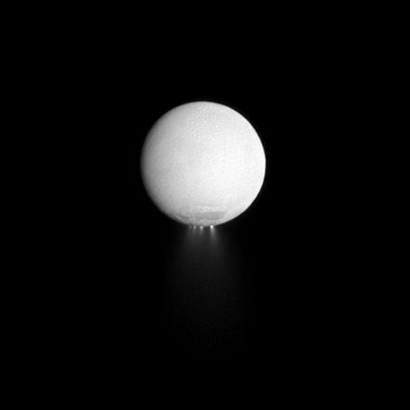 This image, taken by the Cassini-Huygens mission on 25 December 2009, shows at least four plumes of water spewing out of the South Pole of Saturn's small moon, Enceladus. Sunlight reflected off Saturn is illuminating the surface of the moon while the Sun, almost directly behind Enceladus, is backlighting the plumes.

These planetary-sized geysers originate from the 'tiger stripe', a fracture on the surface of Enceladus, and release water vapour and ice into space. Cassini first detected the plumes in 2005. The ejected material, which comes from the moon's underground reservoir of water, forms the Enceladus torus, a tenuous ring of material fed by this moon's plumes and centred on its orbit.

Observations performed with Herschel in 2009-2010 have detected the water torus in absorption against Saturn. Combining these data with models of water evolution in Saturn's environment, astronomers have identified Enceladus as the main water supply to Saturn's upper atmosphere.