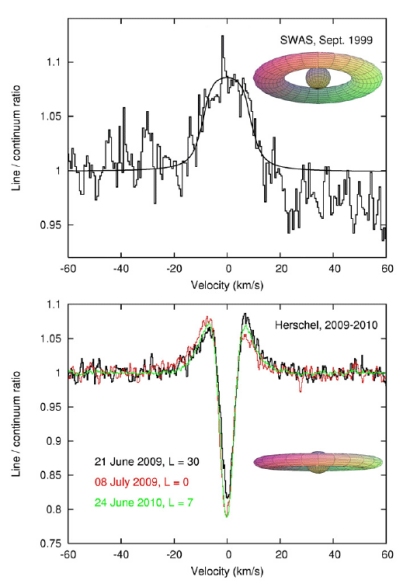 This graph shows water lines in the spectra of Saturn as detected by NASA's Submillimeter Wave Astronomy Satellite (SWAS) in 1999 (upper panel) and by ESA's Herschel Space Observatory in 2009 and 2010 (lower panel).

The two spectra are substantially different. The spectrum acquired by SWAS in 1999 only reveals emission by water molecules in Saturn's atmosphere, at a frequency of 557 GHz. At the same frequency, the HIFI spectrometer on board Herschel has recorded a strong absorption feature, as well.

Emission lines are a sign of water in Saturn's upper atmosphere. In contrast, absorption points at water that is located somewhere in the foreground of the planet, along its line of sight to the observatory, and in a colder environment than that responsible for the emission lines.

The fact that no absorption was detected by SWAS in 1999 is due to the varying geometry of Saturn's system of rings and satellites as viewed from the Earth and its vicinity. As shown by the cartoons in the two panels, the rings and satellites are seen almost edge-on in 2009-2010, whereas the configuration was much more oblique at the time of the SWAS observations. This is a further clue implying that the absorbing water revealed by Herschel is distributed in a torus along the planet's equatorial plane.

Different colours in the lower panel correspond to spectra taken with Herschel on different dates; L is Enceladus' orbital longitude, in degrees, on the three indicated dates, respectively.