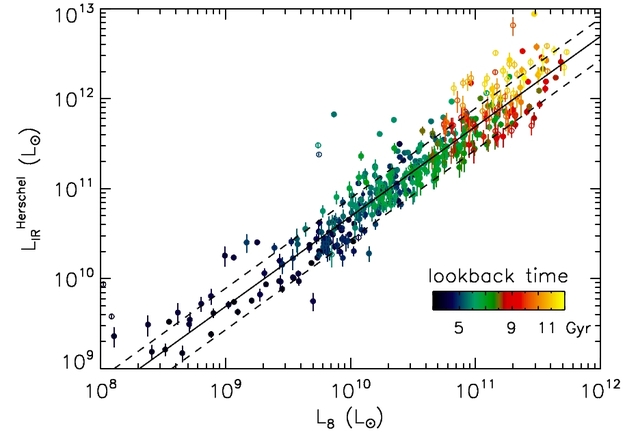 This graph shows the 'infrared main sequence' for star-forming galaxies, proposed by the study of Elbaz et al., 2011, and based on Herschel's deepest observations of the GOODS fields.

On the vertical axis, the total infrared output of the galaxies, which quantifies their star formation activity, is indicated; on the horizontal axis, a measure of their infrared emission at wavelengths around 8 micron is shown. The latter is a good indicator of the spatial extent of a galaxy's star-forming regions. It is in fact at these wavelengths that the two main modes of star formation leave their distinctive signature, as merger-triggered starbursts exhibit weaker emission, around 8 micron, with respect to galaxies forming stars via steadier processes.

The graph shows a tight correlation between these two infrared indicators for most sources (about 80 per cent). All points along the diagonal, or 'infrared main sequence', correspond to galaxies that are forming stars via gentle and steady processes. The points above the main sequence correspond to merger-triggered, star-bursting galaxies, which are outliers with respect to this relation and sum up to only about 20 per cent of the sources.

The colour of points in the graph indicates the distance of the various galaxies. Observing more distant galaxies means probing earlier times in cosmic history. As shown by the colour bar, blue points correspond to a relatively recent cosmic epoch, between the present and about 5 billion years ago, whereas green, red, orange and yellow points correspond to increasingly earlier epochs in the Universe's history, up to about 11 billion years ago.

The graph shows that the main sequence is independent of the galaxy distances, meaning that the mergers' contribution to the build-up of stars in the Universe has been minor at virtually all cosmic times, and that the vast majority of galaxies have been producing stars via less frenzied processes.

Herschel reveals how most stars formed in the Universe