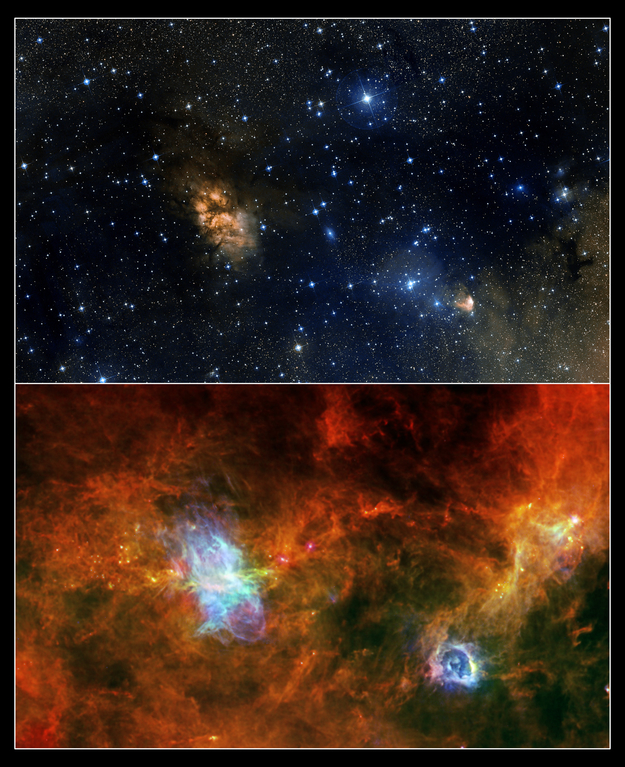 The optical image is dominated by the emission from stars. The eerie orange cloud in the centre-left part of the image is known as RCW 36 (or Gum 20); it is an HII region – a pocket of gas that is being energised and ionised by the action of nearby young, massive stars. Another HII region, called RCW 34 (or Gum 19), can be seen as a small orange fleck in the lower part of the image to the right.

In the far-infrared image, obtained using ESA's Herschel Space Observatory, the reservoir of gas and dust that pervades the Vela-C region is revealed in its full glory. Cosmic dust is a minor but crucial component of the interstellar medium and, due to its low temperature, it shines brightly at the far-infrared wavelengths that Herschel is designed to observe. The image shows how the raw material from which stars form is organised in tangled nests as well as dense, ridge-like filaments. The white flecks that dot the clouds and filaments are the seeds of future stellar generations.

The two HII regions RCW 36 and RCW 34 stand out also in the far-infrared image. Due to their higher temperature relative to the colder material in the cloud, they shine brightly at the shortest wavelengths probed by Herschel, indicated in blue in the image.

The Vela-C molecular cloud is the most massive component of the Vela Molecular Ridge, a vast and prolific star-forming complex in the plane of our Galaxy, the Milky Way.