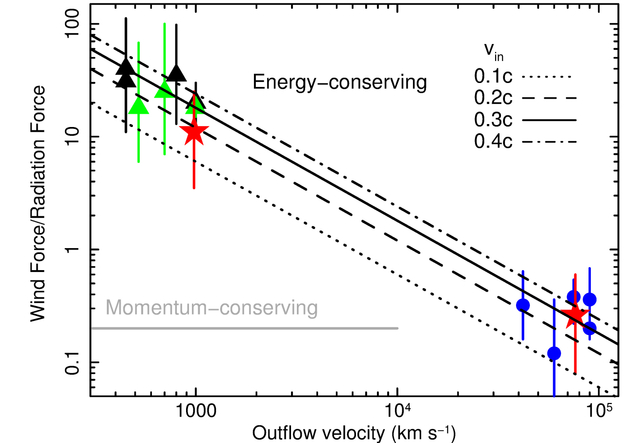 This graph illustrates the strength of winds observed in a number of galaxies as a function of the wind's velocity.

The blue circles at the lower right corner represent fast winds of ionised gas detected in X-ray observations of galaxies hosting active supermassive black holes at their centre. The winds are driven by the accretion activity of the black holes.

The two red star-shaped points represent observations of the galaxy IRAS F11119+3257, where a large-scale galactic outflow was detected by Herschel (top-left point) and a black-hole driven wind at the galaxy's core was detected with the Japanese/US Suzaku X-ray observatory (bottom-right point).

While the black-hole driven wind in this galaxy blows at about 25 percent the speed of light, the outflow of molecular gas is more extended but significantly slower, progressing at about 1000 km/s. This is the first direct evidence demonstrating how a black hole wind is powering a large-scale galactic outflow of molecular wind, linking what happens in the vicinity of the black hole and its global effect on the galaxy as a whole.

Moreover, the comparison between the X-ray and far-infrared data suggests that energy is conserved, not dissipated, in the interaction between the accretion-driven wind and the surrounding interstellar medium. This causes an energy boost and powers the vast outflow of molecular gas, in agreement with the predictions from black-hole feedback models.

The expectation obtained from models of outflows where the energy is conserved between the black-hole driven wind and the large-scale outflow is shown by the four black lines in the graph: four different models are plotted, corresponding to different values of the initial velocity of the wind, indicated in terms of c, the speed of light. These models agree very well with the data.

In contrast, the expected behaviour from a model where momentum is conserved but energy is dissipated (via cooling) when the black-hole driven wind interacts with the surrounding gas is shown in grey, and does not agree well with the observed data.