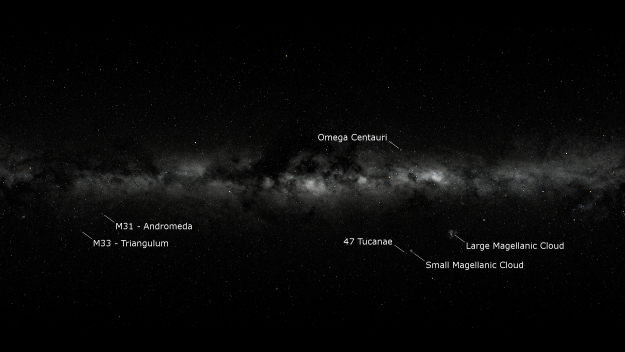 This image of the entire sky at visible wavelengths has been compiled using data from ESA's Hipparcos satellite. It reproduces the night sky as the human eye would perceive it after getting used to the darkness. The sky is shown in galactic coordinates, with the plane of our Galaxy, the Milky Way, running horizontally along the central row of the image; the Galactic Centre is in the middle of the image.

Hipparcos was the first space mission dedicated to charting the heavens, recording the positions of stars in the sky and estimating their distances. It was launched in 1989 and operated until 1993.

The Hipparcos catalogue was released in 1997 and contained the positions of 118,218 stars with a precision of 0.001 arc seconds and spanning distances out to about 300 light-years from the Sun. An additional catalogue, called Tycho-2, was prepared using data from the Tycho instrument – a star mapper – on board Hipparcos. The Tycho-2 catalogue lists positions and distances of over 2.5 million stars, although with lesser precision.

This image shows all the stars from the Tycho-2 catalogue; the brightness and colour of each star are based on photometric data collected in two bands, which correspond to the wavelengths of blue and green light, respectively.

In addition to the individual images of 2.5 million stars, additional data from the Tycho star mapper were used to reproduce the diffuse glow of the Galactic Plane in this image. The diffuse emission recorded by the instrument consists of both unresolved stars and emission from the interstellar medium. The diffuse component also contains minor contamination due to local emission processes: the zodiacal light – diffuse emission from dust in the Solar System – and light emitted by solar wind particles trapped in the Van Allen radiation belts in Earth's magnetic environment.

Hipparcos did not have the capability to image extended sources in the sky, such as nebulae, stellar clusters or external galaxies. Therefore, to complete this image, a small number of such structures that can be detected with the naked eye have been manually added. These are: the Large and Small Magellanic Clouds, two dwarf galaxies that are satellites of the Milky Way, which can be seen as the two extended sources in the lower right part of the image; the Andromeda galaxy (M31) and its neighbour, M33, which can be seen just below the Galactic Plane towards the left hand side of the image; the globular cluster Omega Centauri, which is visible just above the Galactic Plane right of the Galactic Centre, and 47 Tucanae, another globular cluster that can be seen in the lower part of the image, close to the position of the Small Magellanic Cloud.

This image is shown in an equirectangular projection – one of the many transformations that can be used to map the coordinates from a curved surface, such as that of the celestial sphere, onto a flat surface like, for example, that of a sheet of paper. The equirectangular projection preserves angles but not areas; it is very convenient for graphics applications, since the typical image formats that are used in this field support rectangular images.