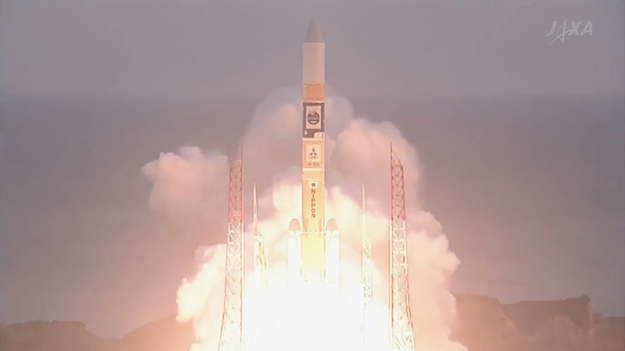 The launch of JAXA's ASTRO-H satellite on 17 February 2016. The satellite lifted off on an H-IIA rocket from the Tanegashima Space Center, situated on a small island in the south of Japan.

Once in orbit, the satellite received its new designation: Hitomi, a Japanese word used to describe the 'eye', and more specifically the pupil, or entrance window of the eye. The name Hitomi, which is also linked to an ancient legend about a painter drawing dragons, is a fitting description for this satellite that will be a new eye to study the hot and energetic Universe.

This space-borne observatory, developed in collaboration with institutions in Japan, the US, Canada and Europe, will probe the sky in the X-ray and soft gamma ray portions of the electromagnetic spectrum.

Liftoff for ASTRO-H, now in orbit as Hitomi