ESA Science & Technology - Relative positions of the planets: May 3 2002

Relative positions of the planets: May 3 2002

Relative positions of the planets: May 3 2002 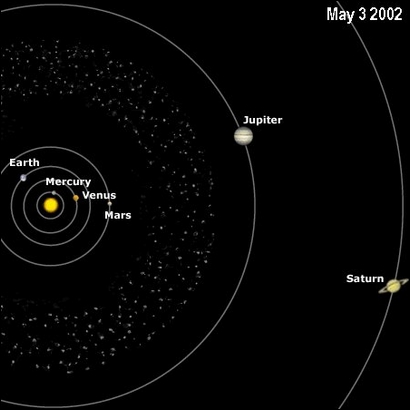 Viewed from above the Solar System the five planets, Mercury, Venus, Mars, Saturn and Jupiter, would appear in these relative positions on May 3 2002. To understand why the planets change their relative positions from night to night, think of them orbiting the Sun at different speeds. At present they are all on the far side of the Sun. In the evening, their orbits are carrying them upwards, while the Earth is moving downwards relative to the Sun. Mercury and Venus orbit faster than the Earth. As a result they make progress upwards in the evening sky. (After May 3 Mercury will reverse when it comes towards the near side of the Sun.) Mars, Jupiter and Saturn travel more slowly than Earth so the effect is to bring them down in the evening sky, until they eventually pass behind the Sun.
View »
7-Feb-2023 12:11 UT