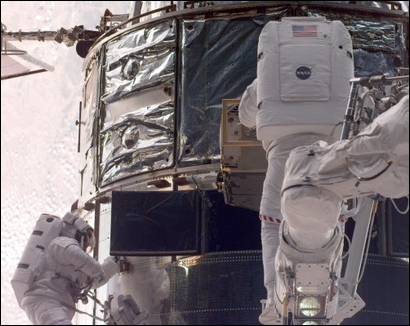 Claude Nicollier is inserting the Fine Guidance Sensor into Hubble. Michael Foale is assisting. A desert area on Earth forms the backdrop for the photo. Nicollier, part of the astronaut corps since 1980, represents the European Space Agency (ESA). Foale, one of NASA's astronauts who had spent several months aboard Russia's Mir Space Station, is an alumnus of the 1987 class of astronaut candidates. The photo was taken with an electronic still camera (ESC).