A Lighthouse Beacon From the Core of an Active Galaxy

A Lighthouse Beacon From the Core of an Active Galaxy 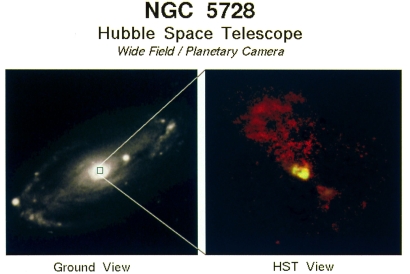 [Right] - A NASA Hubble Space Telescope (HST) view of the core of the barred spiral Seyfert galaxy NGC 5728 reveals a spectacular bi-conical beam of light that is ionizing the gas in the central region of the galaxy. This image is being presented at the American Astronomical Society meeting in Berkeley, California by Dr. Andrew Wilson of the Space Telescope Science institute (STScI), Baltimore, Maryland.
View »
4-Oct-2022 20:59 UT