Double Nucleus of the Andromeda Galaxy

Double Nucleus of the Andromeda Galaxy 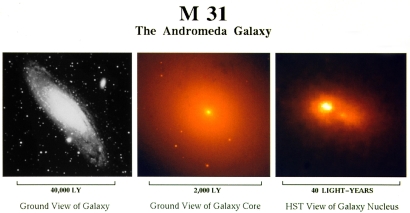 A NASA's Hubble Space Telescope (HST) image of a "double nucleus" in the giant spiral galaxy in Andromeda, M31. Each of the two light-peaks contains a few million densely packed stars. The brighter object is the "classic" nucleus as studied from the ground. However, HST reveals that the true center of the galaxy is really the dimmer component. One possible explanation is that the brighter cluster is the leftover remnant of a galaxy cannibalized by M31. Another idea is that the true center of the galaxy has been divided in two by deep dust absorption across the middle, creating the illusion of two peaks. This green-light image was taken with HST's Wide Field and Planetary Camera (WF/PC), in high resolution mode, on 6 July 1991. The two peaks are separated by 5 light-years. The Hubble image is 40 light-years across.

The nucleus is at the center of the bulge of M31, a smooth system of old stars. The bulge is apparent as the bright center of M31 in standard pictuits of the galaxy. Individual points of light are globular star clusters each containing several hundred thousand stars. This ground-based telescopic image does not resolve the double nature of the nucleus. The background of the present picture is dark only because the contrast has been adjusted to show the lull detail in the nucleus which is much brighter then the surrounding bulge.

One of the closest (neighbors to our own Milky Way galaxy, M31 (the 31st object in a catalog of non-stellar objects compiled by French astronomer Charles Messier in 1774) dominates the small group of galaxies of which our own Milky Way is a member. M31 can be seen with the naked eye as a spindle-shaped "cloud" the width of the full moon.