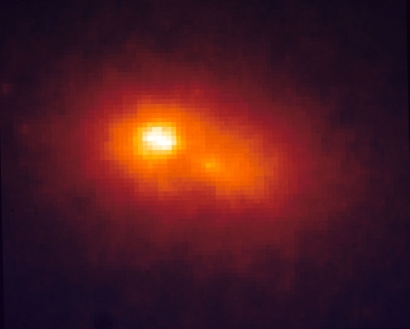 A NASA/ESA Hubble Space Telescope (HST) image of a "double nucleus" in the giant spiral galaxy in Andromeda, M31. Each of the two light-peaks contains a few million densely packed stars. The brighter object is the "classic" nucleus as studied from the ground. However, HST reveals that the true center of the galaxy is really the dimmer component. One possible explanation is that the brighter cluster is the leftover remnant of a galaxy cannibalized by M31. Another idea is that the true center of the galaxy has been divided in two by deep dust absorption across the middle, creating the illusion of two peaks. This green-light image was taken with HST's Wide Field and Planetary Camera (WF/PC), in high resolution mode, on 6 July 1991. The two peaks are separated by 5 light-years. The Hubble image is 40 light-years across.
View »
4-Oct-2022 20:20 UT