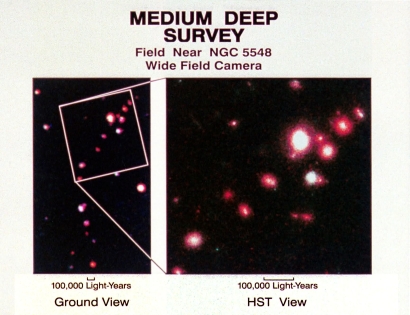 A NASA/ESA Hubble Space Telescope image of a previously unknown small group of galaxies estimated to be three billion light-years away. They existed when the universe was only about 80% its present age. HST's high resolution reveals that many appear to be interacting and merging galaxies. In many cases, at least one member of each pair is blue in color, indicating active star formation, possibly triggered by interaction with a neighbour galaxy. The observations promise to eventually lead to a much dearer understanding of galaxy evolution. This image is part of a serendipitous sky survey which has been conducted over the past two years by Prof Richard Griffiths and colleagues at Johns Hopkins University, with a team of astronomers in the U.S. and Britain. The survey is one of several Key Projects for Hubble. In previous images, the deep survey has uncovered a bizarre variety of shapes and structures in distant galaxies, which only previously appeared as fuzzy blobs from ground based telescopes.
View »
4-Oct-2022 20:03 UT