Evolution of Fragment A Site

Evolution of Fragment A Site 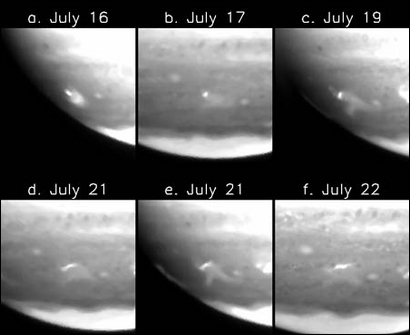 This series of images, which spans more than five days beginning at 5:33 p.m. EDT on July 16, 1994, was obtained with the Hubble Space Telescope's Wide Field Planetary Camera-2 using the methane filter that reveals details in Jupiter's higher atmosphere. These images show the development of the ejecta from site A, formed by the impact of the first fragment of comet Shoemaker-Levy 9. Frames b-f were obtained 19.5, 59.6, 90.4, 109.5, and 129.5 hours later than frame a respectively. Frames a, c, and e are seen near the edge of the planet where the viewing angle enhances bright cloud structure, while frames b, d, and f are viewed more face on.
View »
4-Oct-2022 20:14 UT