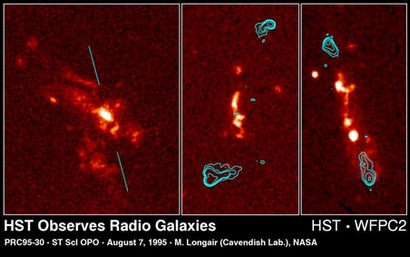 3C265. Hubble resolves numerous bright star clusters or dwarf "satellite" galaxies surrounding a bright central compact structure. The line corresponds to the axis of the galaxy's radio emissions, which unlike other radio galaxies, is in a different direction from the optical region.

3C324. A number of small interacting components are distributed roughly along the radio axis in this source. Comparison of the Hubble image with that from the United Kingdom Infrared Telescope suggests that the central regions of this galaxy are obscured by a large dust lane.

3C368. One of the best studied radio galaxies, this image is composed of a very smooth cigar-shaped emission region closely aligned with the radio axis, upon which is superimposed a string of bright knots that might be stars or dust.