ESA Science & Technology - Changes on the Surface of Io

Changes on the Surface of Io

Changes on the Surface of Io 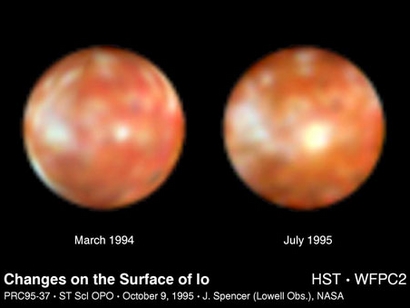 This Hubble Space Telescope pair of images of Jupiter's volcanic moon Io shows the surprising emergence of a 200-mile diameter large yellowish-white feature near the center of the moon's disk (photo on the right). This is a more dramatic change in 16 months than any seen over the previous 15 years, say researchers.

For comparison the photo on the left was taken in March 1994 -- before the spot emerged -- and shows that Io's surface had undergone only subtle changes since it was last seen close-up by the Voyager 2 probe in 1979.