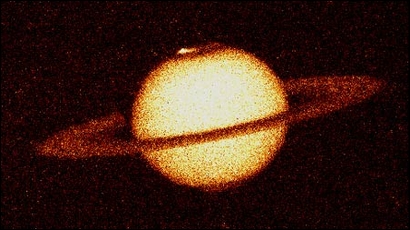 This is the first image ever taken of bright aurorae at Saturn's northern and southern poles, as seen in far ultraviolet light by the Wide Field and Planetary Camera 2 aboard the Hubble Space Telescope.

The aurora is produced as trapped charged particles precipitating from the magnetosphere collide with atmospheric gases -- molecular and atomic hydrogen in Saturn's case. As a result of the bombardment, Saturn's gases glow at far-ultraviolet wavelengths (110-160 nanometers) which are absorbed by the Earth's atmosphere, and so can only be observed from space-based telescopes.