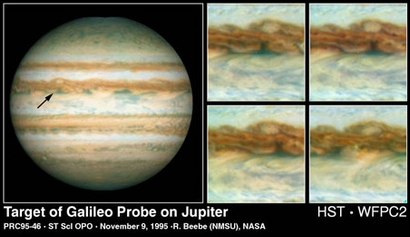 This Hubble Space Telescope image of Jupiter was taken on Oct. 5, 1995, when the giant planet was at a distance of 534 million miles (854 million kilometers) from Earth. The arrow points to the predicted site at which the Galileo Probe will enter Jupiter's atmosphere on December 7, 1995. At this latitude, the eastward winds have speeds of about 250 miles per hour (110 meters per second). The white oval to the north of the probe site drifts westward at 13 miles per hour (6 meters per second), rolling in the winds which increase sharply toward the equator.

These four enlarged Hubble images of Jupiter's equatorial region show clouds sweeping across the predicted Galileo probe entry site, which is at the exact center of each frame (a small white dot has been inserted at the centered at the predicted entry site). The first image (upper left quadrant) was obtained with the WFPC2 on Oct. 4, 1995 at (18 hours UT). The second, third and fourth images (from upper right to lower right) were obtained 10, 20 and 60 hours later, respectively.