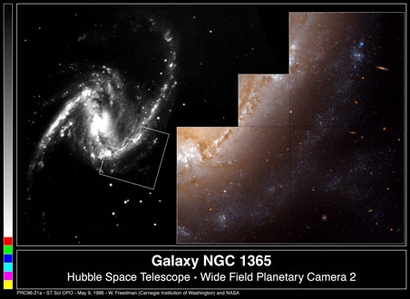 This color image from the Hubble Space Telescope shows a region in NGC 1365, a barred spiral galaxy located in a cluster of galaxies called Fornax.

A barred spiral galaxy is characterized by a "bar" of stars, dust and gas across its center.

The black and white photograph from a ground-based telescope shows the entire galaxy, which is visible from the Southern Hemisphere.