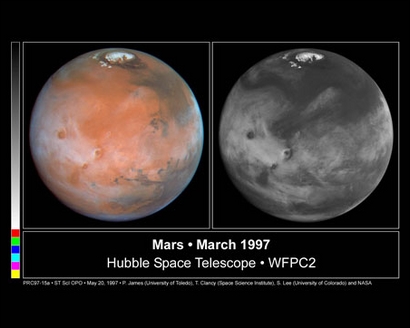 These color and black and white pictures of Mars were taken by the NASA/ESA Hubble Space Telescope just two weeks after Earth made it's closest approach to the Red Planet during the 1997 opposition. When the Hubble pictures were taken Mars was at a distance of 62 million miles (100 million kilometers) and the resolution at the center of the disk is 13.5 miles/pixel (22 kilometers/pixel).

Both images were made with the Wide Field and Planetary Camera 2.